I recently had the privilege of attending BurlyCon from November 12-15, 2015. There is always so much to take in between movement classes, makeup and hair classes, discussions on marketing and branding, plus the networking parties. It’s an overwhelming but magical time of year. And it’s hard to come back to reality afterwards. But, in the spirit of the weekend, you unpack, catch up on emails, and then get to WERK! 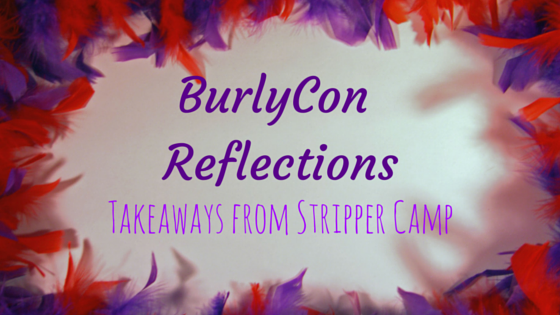 I wanted to discuss my takeaways from BurlyCon that would be in a manner that doesn’t give away class content, since if you are a burlesque professional you should really try to experience the event for yourself (you’ll get much more from it than my abbreviated rundown). So, I’m writing down a few ideas of what I want to work on based on what I learned as well as what I’m hoping to accomplish within the next year.

In the past my burlesque goals would revolve around act creation and then hoping to get booked. Instead, I am planning on utilizing a different kind of goal. I want to set up quantifiable goals for how much I get booked. For 2016, I will strive to perform in a certain number of performances locally, as well as a goal for performances regionally. I’m also going to TRY to resist applying for ALL THE FESTIVALS and instead concentrate on Midwestern festivals to try to build up those connections to travel more.

In order to reach my performance numbers, I’m going to have to keep my acts polished, update my costuming, and network! Network is a scary term for me by the way. I think just getting my butt to more shows and at least saying hi will be more than what I’ve been doing.

My usual choreography method involves listening to the music over and over again, then trying different moves that seem to fit with the song. However, I always find that one spot in the song that I feel stuck, so I just stick a move in there that I’m not in love with and leave it at that.

I took a couple of choreography classes, “Compose Yourself” by Maxie Milieu and “Power of the Pose” by Ruby Joule. I highly recommend both of these classes if you get a chance to take them. In general, they both addressed the way certain poses and moves can communicate certain things to the audience, so instead of just dancing along, I hope to make a spreadsheet (because I’m that nerdy) where I will plug in the lyrics and write out intent for certain parts of the music before I get the act on its feet. I hope that I’ll be able to find stronger choreography by really digging deeper into what I want to convey with this number. And if I find the spreadsheet useful, I’ll share it.

On a side note, I didn’t take any of his classes this time around since I had taken his classes before, but Willy Barrett is also awesome to take choreography classes with, and has a whole other level about talking about intent in choreography. Watch him unwrap a chocolate bar. He is the hottest thing in the room and the only clothes he takes off is his jacket.

Be a Better Ally

This is something that has been on my mind for a little while. After taking “More Sequins and Social Justice” with Lillith Grey, we discussed not just being more inclusive, but creating and curating opportunities for POC and other marginalized communities. I’m going to seek out more conversations and listen to what is being said. I’ve already learned one thing about my troupe that may have turned off POC to at least one of our shows (a theme that was seen as “white”) and while it was a theme based on what acts the Better Boobie Bureau members already had, it was a theme that isn’t seen as inclusive to some groups. I will work to do better.

There is always something new to learn at BurlyCon, and it’s not always a new dance move. Did you take something different away with you when you attended? I’d love to hear about it. Please share below what you learned and how you’re implementing your new knowledge in the coming year.

Liked it? Take a second to support phaedrablack on Patreon!

Previous Post: On Set at the Puck and Grind Calendar Shoot
Next Post: How to Make Pasties – Jewelry for Your Nipples